Climate Refugees. Who’s next after Syria? 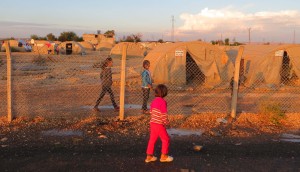 Refugee camp in Suruc (Turkey) near the border with Syria.
Photo by Hristo Panchev

Increasingly difficult, and in some places impossible living conditions brought about by climate change are forcing large groups of people to abandon their land in search of new territory. Intensifying climate change is exacerbating this phenomenon to the extent that it may soon trigger unprecedented chaos and a series of negative impacts with profound economic, political and social consequences.

According to a report from the Internal Displacement Monitoring Centre, in 2014 more than 19.3 million people from 100 countries were forced to flee their homes due to natural hazards (IDMC, 2015). Natural events have displaced large groups of people throughout the history of human civilization, but the current intensity of climate change effects is now making this type of mobility much more dynamic and difficult to manage.

The first climate refugees have already appeared. In the US for example, they include the inhabitants of the small town of Newtok, western Alaska, which is literally sinking. Due to the change in climate, the permafrost is slowly melting, the local river rises and breaks its banks. Erosion causes hazardous living conditions for the local people. According to a report from the US military in 2009, exceptionally heavy damage is expected in the territory in the next decade. Newtok inhabitants are already moving to other less dangerous places, but according to the Alaska Village Erosion Technical Assistance Programme, the estimated cost to relocate Newtok is between $80 million and $130 million (U.S. Army Corps of Engineers, 2009: 5-5). This amounts to about 370,000 US dollars for every one of the 354 inhabitants.

The Newtok case unfortunately is not unique. There are 162 endangered territories in Alaska alone, categorised to allow decision makers to determine where resources should be focused. The 3 risk categories are as follows: Priority action – 36 communities including Newtok; Monitoring Conditions – 69 communities; and Minimal Erosion – 83 communities (U.S. Army Corps of Engineers, 2009: 4-1). Various complications accompanying the climate refugees from these areas will challenge the economy and the social organisation of the USA. But what would happen to societies facing similar problems which do not have the resources, equipment, training or organisational abilities of the US?

Unlike the population of Newtok, residents of sinking islands have nowhere to go. The case of Kiribati in the Pacific is an example. The country is located on coral atolls, but large parts of the land are already underwater. The sea level keeps rising and will soon engulf the remainder. Since March 2012 the government of the sinking island has been reacting by negotiating to buy land from the Republic of Fiji in order to accommodate the entire population of Kiribati, numbering almost 103,000 inhabitants (Aleksieva, 2012: 88). Many other countries might soon share the same future: the Marshall Islands and Tuvalu in the Pacific, the Maldives and the Seychelles in the Indian Ocean. Densely populated parts of Europe are also under threat.

All continents and countries are affected. Over half the population of the planet — about 3.2 billion people — lives and works along or near coastlines on just 10% of the earth’s land surface (Hinrichsen, 1999). Any deterioration in living conditions, even only on fractions of those areas could push millions of refugees to seek better conditions where it is still safe and climate change is still not the main issue. In this way a local problem turns into a global issue. Massive flows of refugees challenge institutions, the economy, national security, the political system and the organisational capacity of each hosting country in a given region. Shortages of food, water and resources, escalating tensions, economic disruption and institutional paralysis are a prelude to complete chaos, which might not only transform entire regions, but will gradually turn into a global challenge.

And while stories of sinking islands and erosion in Alaska sound abstract for many, we can already say that the climate lies at the core of the biggest refugee crisis in Europe after WWII. Numerous studies have shown that the chaos in Syria, the rise of Daesh and the mass migration in the region were all catalysed by the record droughts in Syria between 2007 and 2011 (De Châtel, 2014).

Research published by the British National Academy of Sciences shows that extreme droughts, combined with bad management and unsustainable agricultural practices, led to a severe and continuous decline in harvests and mass migration from rural to urban areas in the country. This exacerbated political instability, which eventually escalated into protests against the rule of Bashar al-Assad in 2011. The study also indicates that “century-long observed trends in precipitation, temperature, and sea-level pressure, supported by climate model results, strongly suggest that anthropogenic forcing has increased the probability of severe and persistent droughts in this region and made the occurrence of a 3-year drought as severe as that of 2007−2010 2 to 3 times more likely than by natural variability alone” (Kelley et al, 2015).

In this connection, in an interview given for TIME magazine Francesco Femia, director of the US based Center for Climate and Security, concluded that the droughts during that period were a reason for the displacement of 2 million Syrian citizens. “That internal displacement may have contributed to the social unrest that precipitated the civil war. Which generated the refugee flows into Europe. And what happened in Syria is likely to play out elsewhere going forward” (Baker, 7.09.2015).

Declining crop yields, a growing number of flooded low-lying or coastal areas, and desertification due to severe droughts are generating increasing competition for access to living space and fertile areas. This will inevitably lead to more tension. A study published by the US Academy of Sciences shows that in the pre-industrial period, long-term fluctuations in the frequency of wars and population changes corresponded to cycles of temperature change. Long-term temperature changes affecting crop harvests generate a series of negative social concequences. The findings suggest that worldwide and synchronistic war – peace, population, and price cycles in recent centuries have mainly been driven by long-term climate change. High prices and the economic burden due to other implications of the current change in ecosystems would also cause social unrest, military conflicts, famine and, eventually, a decline in population. (Zhang et al, 2007).

Currently the bulk of evidence indicates that we are on the brink of a long-term temperature change. Droughts and floods destroy crops in many places around the globe. Fertile areas are suffering the effects of climate change and huge groups of people are migrating chaotically to find sustenance and security. Hunger and lack of resources are driving up crime rates. Social conflicts are exacerbating and weapons are becoming the main conflict resolution instrument. When proper social organisation is missing and the government is too weak to manage these complications by applying relative measures for climate change adaptation, social problems deteriorate. But as a result of chaos and decreasing revenues, institutions are finding it increasingly difficult to function. Moreover, these implications generate an even greater risk for the environment and the climate, which further limits the capacity for adaptation and mitigation.

In Somalia for example, the total lack of state control has allowed armed gangs to embezzle the resources of this poor country, with no care for local people or the environment. The production and export of charcoal is among the main sources of income in the country. But the lack of control has led to mass deforestation and severe changes in the ecosystem (Kolmannskog, 2009: 5). The result is more droughts, lower incomes from the primitive farming systems, total lack of justice for local people and even greater comfort for armed criminals.

In societies with more organisational capacity, well-functioning institutions may be a source of hope. But this hope may turn out to be misplaced. The authors of a study focused on social change and natural selection argue that in the course of socio-cultural evolution we have established cultural mechanisms and institutions that can minimise conflicts between individuals and their “tribes” within society and can generate a sense of belonging on a nation state level. This achievement in human evolution limits minor advantages on an individual level for the sake of the greater advantages we all receive as a result of a well-functioning system. Although fairly resistant in some critical situations, these long-established cultural connections may easily break due to simple factors such as loss of confidence in institutions and petty corruption. (Richerson & Boyd, 2000).

With the ongoing intensification of climate change and its negative effects, the socio-cultural achievements of our civilization will no longer be sufficient to ensure that common well-being prevails over individual interests. This will lead to divisions and clashes in the most unexpected places. In a state of chaos, individual interests, driven by basic survival instincts, will follow purely tribal principals of organisation. The old system, designed for all members of society, will simply be out of order. Instability and lack of the socio-cultural experience possessed by “institutionally-wise societies” will generate more tensions and the downward spiral could be catastrophic for civilization as we know it.

Considering all this, it is a remarkable paradox that the term “climate refugees” remains alien to the international legal framework. In practice, people fleeing a sinking island or land turning into a desert do not have the right to protection as enshrined in the 1951 Refugee Convention, such as protection from persecution due to political reasons, religion, race, nationality or social class. The topic is highly complex because it is difficult to argue whether a person or a group has fled due to climate change or in search of better economic opportunities. But one thing is clear: there is a growing need for urgent decisions on this matter.

The war in Syria has sharply highlighted that a local problem caused by a combination of factors such as climate change, bad organisation and escalating internal migration can develop in only a few years into a global social disaster – difficult to solve, but clearly defined in international conventions and legal documents. In other words, an adequate response to the internal climate migration between 2007 and 2011 in Syria could have prevented the disintegration of the country, the suffering of millions of human beings, clashes in Europe and even the global rise of populist rhetoric.

De Châtel, Francesca. The Role of Drought and Climate Change in the Syrian Uprising: Untangling the Triggers of the Revolution. Middle Eastern Studies, 50:4, 2014, pp. 521-535.

Climate News From The Web

Ecological Footprint
Our lifestyle choices make up our environmental footprint. Measuring yours takes less than 5 minutes and could change the way you live.

How big is your environmental footprint?

Calculate your CO2 footprint and see how you can offset it.